How Do You Squeeze 150 Years into Thirty Seconds? 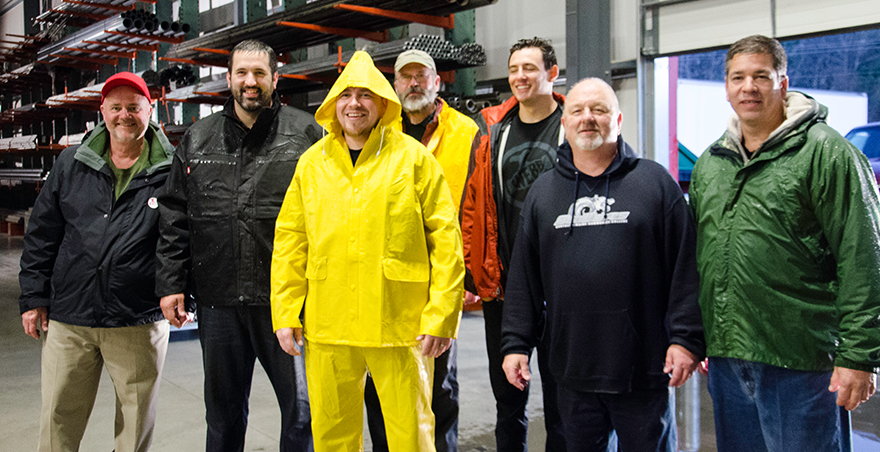 Bedford, MA- when F.W. Webb Company decided to leverage its 150th Anniversary to communicate about its growing number of locations and network of expertise, the company's marketing team focused on the advertising medium that had created the largest amount of awareness for F.W. Webb and its retail Frank Webb's Bath Center showrooms in the past: television. With the correct selection of programming, their message could be broadcast across the 9 states where they currently conduct business and be seen by their target market. The intent was to make F.W. Webb employees proud of the company's heritage, reinforce relationships with existing customers and spread the word to new potential customers.

As F.W. Webb celebrates its 150th year, they reach a milestone shared by less than 10% of businesses listed on the U.S. Stock Exchange and even fewer, like Webb, that are privately owned. F.W. Webb Company is the Northeast's largest wholesale distributor, offering 14 areas of expertise including plumbing, heating, HVAC and refrigeration, pipes, valves and fittings (PVF) and a list of specialty businesses serving residential and commercial contractors, as well as industry professionals. Just giving their elevator pitch takes more than 5 minutes, so the challenge was not in coming up with great things to say about the company; it was culling down 150 years of success into a 30-second television spot.

F.W. Webb Director of Marketing Alicia Criniti worked with the company's ad agency, The McCoy Group and Dan Small Productions, to tackle the challenge. As official sponsors of the Boston Red Sox, Webb had been producing television commercials for the past several years that ran during Red Sox baseball games. However, this campaign would be the first opportunity to tell their corporate story to customers and prospects far beyond Red Sox country.

"Our creative team started with interviews with top executives, asking what makes the company different," said Criniti, "and the answer that always came back was 'our people.'"

Next the team sought to farm stories about how Webb people were different, sharing that every company says their people are better than the competition, so the spot shouldn't hinge on that concept unless it were able to be exemplified authentically. Criniti contacted more than 100 members of management and sales located in more than 80 locations, asking them to share a story where someone on their team went "above and beyond" for a customer. The results led them to several phone conferences and the stories they told were notable and impressive.

Still the team felt that they needed more input to create a script that would authentically show the passion and commitment of F.W. Webb employees. So they visited several locations and met with management teams in specialty areas. It was on a visit to F.W. Webb's Cranston, Rhode Island, location, which specializes in commercial and industrial pumps, high purity process components and industrial PVF specialties, that they were convinced that they needed to produce not one, but two TV spots to communicate F.W. Webb's key differentiator: the passion and dedication of the people who work there.

"There were six F.W. Webb employees sitting in the conference room telling us stories," said Kelly McCoy, who owns F.W. Webb's ad agency, The McCoy Group, with her husband, Jim. "They modestly started a series of stories about one team member who drives out of his way to drop an order off to a customer at his home one night every week, then how they worked through the weekend to help a mechanical contractor who called on Friday at 4:30 to say he needed hundreds of feet of pipe at a jobsite in the city on Monday morning to stay on schedule. There were stories of working long into the night, driving miles in private vehicles to pick up parts, of suggesting that a customer didn't have to purchase a new pump, because they could repair the one he had. The momentum built over two hours."

"That day we realized that the reason we'd never heard these stories in ten years of working with the company," continued Jim McCoy, "was because this is routine business for them. In fact, they were almost a little reluctant to share the stories. Finally one of the managers said, 'We don't think of this as extraordinary, this is just how we do business.'"

Bingo. Not only were the stories interesting, they were authentic and they explained a business culture that has not only survived, but also thrived, for more than a century. At a time when service is on the decline in many arenas, these stories were inspiring. The McCoys and video producer Dan Small spent the next week reviewing the stories they'd heard on the first conference call and the notes from the Cranston meeting. The path was clear, there were two stories that stood out most to exemplify F. W. Webb's culture, so they crafted scripts and presented spot storyboards that soon became known as "Epic Rain" and "Industrial Emergency."

The first spot, which highlights their core residential plumbing and heating distribution business, tells the true story of F.W. Webb Manager Bob Matvichuk during the Mother's Day storm and New England flood of 2006. Matvichuk was called at home on Sunday morning by a desperate plumber trying to help homeowners with flooding basements. Matvichuk had stocked extra sump pumps and other supplies when he heard the weather forecast the week before, figuring people would be looking for help on Monday if the storm materialized. When he got the call, he left his home in the torrent to open F.W. Webb's local store on that Sunday morning to deliver a sump pump to the customer immediately. Before the transaction was done dozens of trucks were lined up waiting. Matvichuk called others inside the F.W. Webb network to get additional deliveries that Sunday from Webb's Central Distribution Center and, by the end of the day, had provided more than 600 sump pumps, as the only resource in the area able to help.

Equally compelling was the story that became "Industrial Emergency," which finds a female F.W. Webb industrial salesperson on her way to a meeting when she gets a panicked call from a customer whose 12" flanged gate valve has blown and brought a steam generation plant to a standstill. The F.W. Webb employee diverts from her meeting and goes into action to find the large valve several states away at a Webb location. She coordinates with the company's Central Distribution and their fleet of trucks to pick up the needed valve and deliver it to the plant within the same day, a feat that they do routinely to help customers in emergency situations.

While professional actors were engaged for certain parts, the creative team cast real employees in key roles to ensure total authenticity. Manager Bob Matvichuk played himself in "Epic Rain," while several Dover, NH branch employees were cast as the long line of plumbers needing sump pumps. Stacy Papa, a member of the company's outside sales team in S. Portland, Maine, plays the "Industrial Emergency" salesperson, while Greg Bodlovick, manager of F.W. Webb's Central Distribution facility in Amherst, New Hampshire, played himself at the hub of the action.

As snow season was pressing down on the production, Dan Small hired a special effects company to produce torrential rains (on a cold and sunny day) in front of the home where Matvichuk receives his Sunday morning call in the commercial, as well as outside the F.W. Webb location in Dover, where the plumbers congregated in the storm to get their sump pumps.

To further employ locations and techniques that would communicate an authentic industrial emergency, F.W. Webb arranged for the industrial plant scenes to be shot at an actual customer site, a testament to Webb's close customer relationships.

"We felt incredibly fortunate to be working with a company that had such great relationships both inside and outside the company," said Small, whose crew of camera, lighting, sound, special effects and location professionals worked over a month to create the real-life stories in six locations.

"It was incredibly interesting and gratifying," said Kelly McCoy, "to have crew and actors at every shoot saying they were amazed that these were real stories. Everyone we've told about the spots responds with, 'You don't find companies who offer this kind of dedication very often,' and that's exactly what we were going for from the beginning. F.W. Webb is unique and has a great story to tell and we're excited to have been given the opportunity to do just that."

To top it off, F.W. Webb President Jeff Pope agreed to be the voiceover talent, delivering lines that include, "People don't do business with companies. People do business with people." He also wraps up the commercials with a thank you to employees for making the company successful. While he'll share this message many times over the 150th Anniversary year, the public display of gratitude to the team that goes above and beyond is a unique ending to the television ads.

F.W. Webb's 150th Anniversary commercials will run on local news in 18 markets for six weeks in the spring and another six in the fall. The spots will also be seen on New England Sports Network during Red Sox season this year. 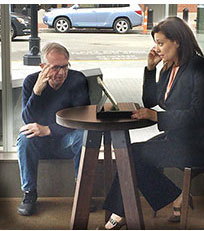 Outside Sales Representative, Stacy Papa, is coached by Director, Dan Small, on the set during filming 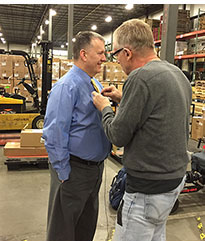 CD General Manager, Greg Bodlovick, is prepped with a microphone prior to filming