New facility in Londonderry, NH to better serve the rapidly expanding Northeast distributor and its customers 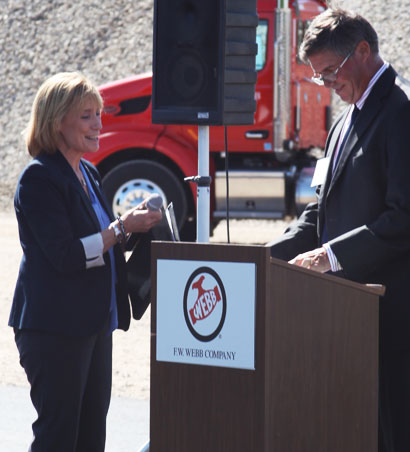 The F.W. Webb Company held a groundbreaking ceremony today at the site of its nearly one-million-square-foot Central Distribution (CD) facility under construction in Londonderry, NH.

Hailed as one of the largest facilities of its kind in the state of New Hampshire, the new CD will replace and be more than double the size of the company’s current CD in Amherst, NH.

With heavy equipment and machinery providing a buzz of activity in the background, preliminary work continued unabated as state, local and F.W. Webb officials, along with many other supporters and interested parties, gathered at the construction site to commemorate the company’s latest milestone.

"Relocating Central Distribution to Londonderry from Amherst represents a major investment in our operations and a significant commitment to our customers and manufacturing partners," said Jeff Pope, president of the F.W. Webb Company. "This huge, state-of-the-art CD facility will allow us to offer our customers even more and better products and reach further into the Northeast. We expect it will serve us indefinitely."

F.W. Webb has been growing quickly through acquisitions and movement into new geographies, expansion of existing locations, establishment of new manufacturer relationships and addition of new products, services and disciplines. As a result, the company is handling a greater volume of product for a larger number of customers in more locations than ever (90+ throughout New England, New York, New Jersey and Pennsylvania). "A new CD is essential to accommodate both present demand and anticipated growth," Pope added.

The project is expected to be completed in the last quarter of 2017. F.W. Webb plans to retain and transfer all 138 employees currently working at the Amherst location to the Londonderry facility. Additional employees will be hired as needs dictate as the facility ramps up to full capacity.

Marking its 150th anniversary in 2016, the F.W. Webb Company has a long heritage of proudly serving residential, commercial, industrial and institutional customers with their construction, renovation, maintenance and repair needs. Founded in 1866 as the second plumbing supply house in Boston, F.W. Webb has grown from a single location to more than 90 across nine states. The largest distributor of its kind in the Northeast, F.W. Webb has extensive inventory and expertise in 15 distinct areas. Plumbing, Heating, HVAC, Commercial Refrigeration and PVF are the company’s core businesses. F.W. Webb also operates nearly 40 Frank Webb's Bath Center showrooms. F.W. Webb employs more than 2,000 people and continues to grow organically and through acquisition to better serve its loyal customers throughout New England, New York, New Jersey and Pennsylvania.